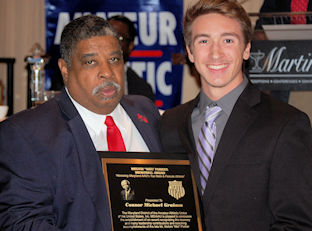 The heat of that spotlight came into sharp focus when legendary Maryland AAU District Governor Ben Dubose surprised Graham with the 2015 Melvin “Mel” Parker Award presented annually to the top male and female athlete in Maryland who achieves a high standard of performance in AAU sanctioned district, regional, or national competition. The award is presented to the two individuals, under the age of 18, in recognition of their commitment and achievement in their individual or team sport.

The honor was conceived as a way to focus attention on their participation in athletics, school and community activities, and qualities of leadership, character, and sportsmanship.

“This is one of the most awesome things that has ever happened to me,” said Graham, 17, a Virginia Wesleyan College signee. “Just awesome. I know a lot of the guys who won awards in the other categories and we play against each other, and I know how good they are. I’d never really thought about having a chance to win. There are some real studs out there, so this is an incredible honor for me.”

The 5-foot-10, 150-pound centerfielder led his AAU select-travel team, Maryland RBI, to a 34-12 record in the RBI AAU Wood Bat League and the Major League Baseball (MLB) WASHINGTON NATIONALS YOUTH BASEBALL ACADEMY-centered DC Metro League. Graham finished the summer with a .426 batting average with 3 triples, 3 doubles and 17 runs batted in. He led in on base percentage (.533), slugging (.574) and on base plus slugging at 1.107. In addition to receiving the “Mel” Parker award, he was named Maryland AAU Baseball Player of the Year and AAU all-district. He won the AAU Memorial Day Classic Wood Bat Home Run Derby at Riva Park (330’) in Annapolis.

Playing for Northern as a junior in the state’s second-highest classification and most competitive baseball section and region (Section I, Class 3A South Region—Northeast, Huntingtown, Northern, J.M. Bennett, Stephen Decatur), Graham helped the Patriots to a 14-7 record and the MaxPreps Maryland Class 3A #4 final ranking, hitting .339 with 18 RBIs, 18 runs, and led the Patriots in doubles (5) and stolen bases (10) with a .431 OBP. He was named first team all-county, first team academic all-conference and was a preseason all-state nominee. It was the second time he was named academic all-conference.

He has maintained a 3.5 GPA in the classroom and scored well on the SAT. A member of the National Honor Society, National Academy of Finance, Future Business Leaders of America, The Academic Team, and Founding President of the Chess Club, he received the Excellence in Accounting Award. He has donated his time to various service projects, including placing holiday wreaths at Arlington National Cemetery at the graves of veterans in remembrance of their service and sacrifice, Special Olympics, annual food drives, public schools landscaping and clean up, shoveling snow, and involved with his local Little League umpiring and working concessions. He has also volunteered in association with the Northern band working concessions as a fundraiser at games of the Minor League Baseball (MiLB) BOWIE BAYSOX affiliate of MLB’s BALTIMORE ORIOLES.

“It is with great pride that I congratulate Connor,” Northern baseball coach Bobby Gibbons said. “Over the last several years, I have watched Connor develop into an outstanding baseball player and an even better young man. Hard-working and a leader, he can hit the ball well, obviously track it in the field, and he has the speed package – that's what makes him valuable to college coaches; they can see him getting on base and wreaking havoc and running down flies to the fence. That's one of the big things, having the combination of all those skills. His future on and off the baseball field is limitless and all of us involved with Northern Baseball wish him the best of luck."

A 2013 AAU National Underclassman All-Star, he played last summer in Germany and at the European Championships in Prague, Czech Republic, as a member of Planet Baseball’s team of American, Mexican and Canadian MiLB, collegiate and high school players.

The “Mel” Parker Maryland AAU Male High School Athlete of the Year Award recognizes outstanding athletic excellence as well as high standards of academic achievement and exemplary character demonstrated on and off the field.

As the first Ruth’s Baseball Ideals (RBI) Baseball Club (Annapolis, Md.) player to win Maryland AAU Male High School Athlete of the Year honors in all sports, Graham is also one of the nominees for the 2015 AAU Sullivan award recognizing the nation’s AAU athlete of the year in all sports.